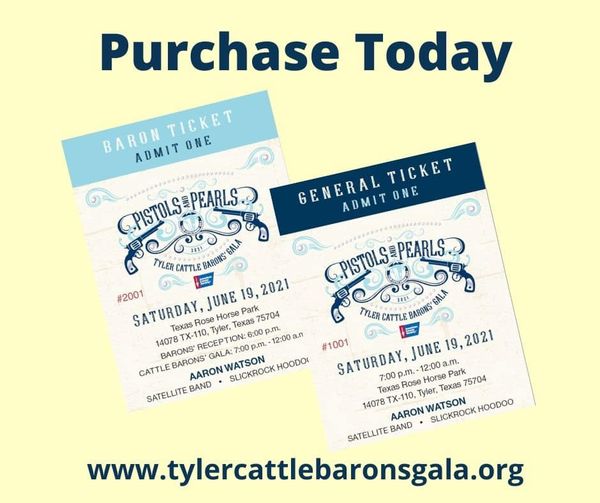 The first Tyler Cattle Barons’ Gala was held in 1988. While much was known about this disease, much more was not. 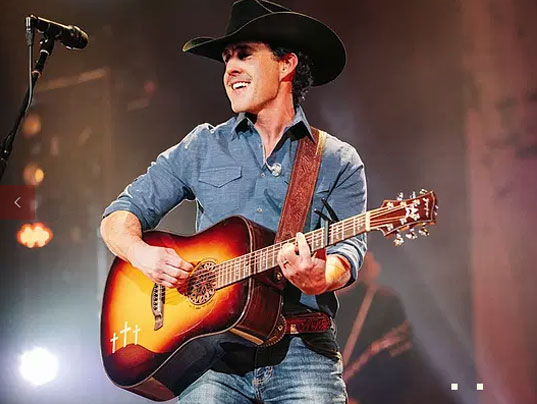 To date, over $15 million dollars has been raised locally to support both local and national cancer support services including cancer research. Without the help and local support of past contributors, this would not have been accomplished. For that, we thank you and appreciate your support now and in the future. As we embark on this journey, we are anxious to meet new supporters who will help us and the ACS combat cancer.

Enjoy an evening of wonderful food, entertainment by Aaron Watson, our gaming tables, live and silent auctions, and so much more.

On behalf of the 2021 Cattle Barons’ Committee, we hope you will join us on June 19th, 2021 at the wonderful facilities of Texas Rose Horse Park for the Gala we have planned for you. Enjoy an evening of wonderful food, mainstream entertainment, our gaming tables, live and silent auctions, and so much more. All who attend will enjoy their evening!

Cancer does not discriminate, and never will. Someday, we hope that cancer will be eradicated and, together with your support, we can all do our part. We also celebrate survivors, who possibly wouldn’t be here today were it not for the actions of the American Cancer Society. While cancer is still ever present today, positive steps forward have been made and more will come, and for that, we thank you. 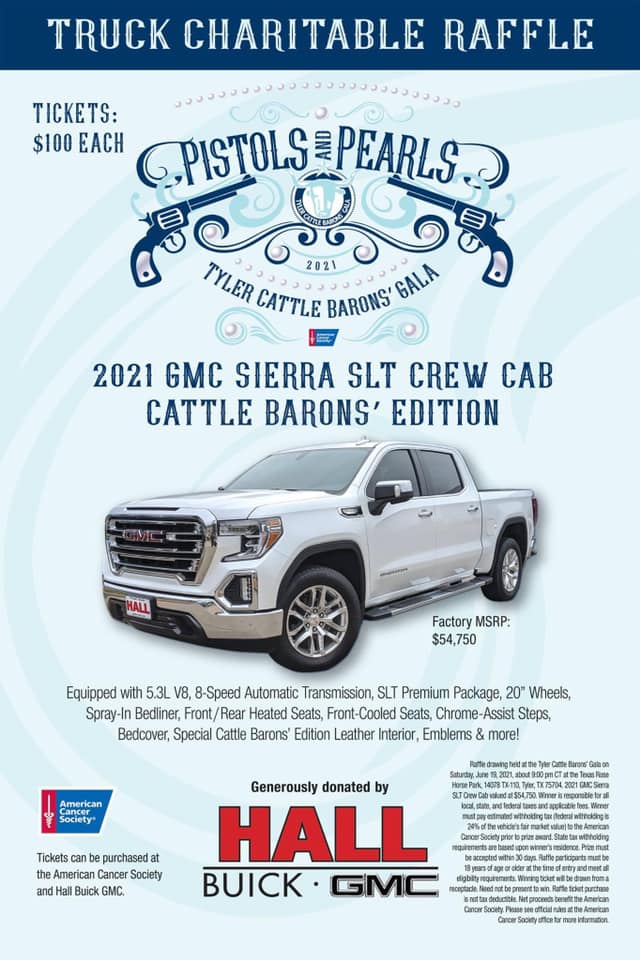 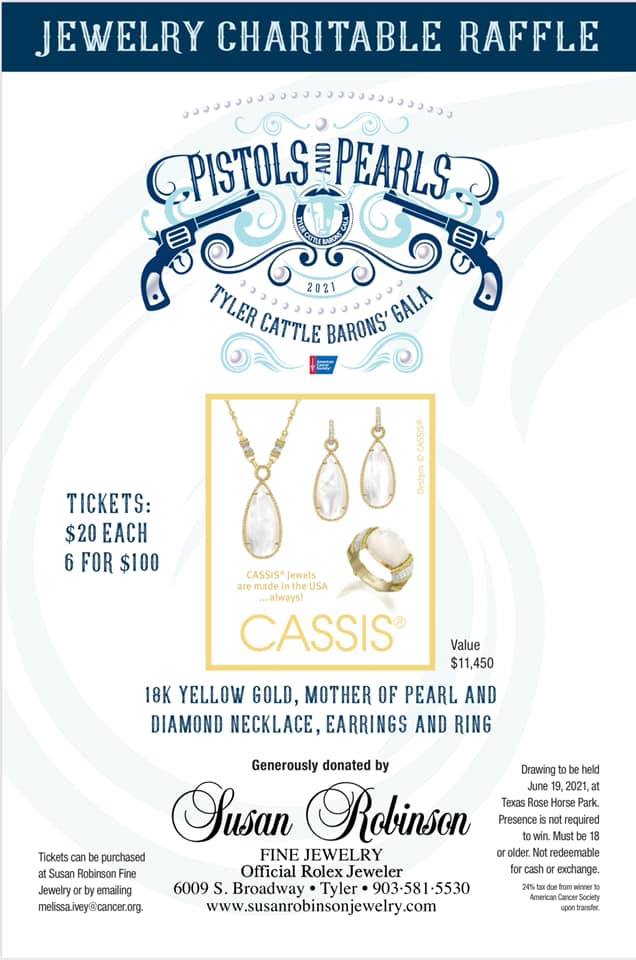 “The symbolism of the bandana for me is like the American working-class heart: hustle, grit … hard work. Anywhere you find those things, you find that red bandana. It’s old-school but it’s also timeless.”

Old-school but timeless: That’s how Aaron Watson characterizes his bold new full-length collection, Red Bandana, but he could also be describing himself. As a singer-songwriter, husband, father of three, and self-made musical success, the 41-year-old Texan has forged a slow and steady path to country stardom by both honoring tradition and embracing the unknown. He’s more comfortable than most walking the line.

Red Bandana not only reacquaints fans with an artist serious about song craft and sonic diversity; it also marks a career milestone for Watson. Twenty years after he released his debut studio album, 1999’s Singer/Songwriter, he’s found an imaginative way to commemorate his two-decade journey. The new record comprises 20 songs he wrote by himself, with tracks and musical moods that hit on every era of his life.

At Red Bandana’s heart is a couple of tunes that give the album its title. First,“Riding With Red” elevates the lessons and the example offered by older, wiser cowboys. The real-life inspiration for the touching ballad? Texas cowboy poet Red Steagall, whom Watson considers a friend and mentor.

“My boys love Red. They just gravitate towards him; he’s a legend,”Watson says.“And in the song,you think that Red’s passed away. But I wanted to write from that perspective so that people who have cowboys like that in their life will, after hearing that song, go hug them and know, ‘I don’t need to take that person forgranted.’”

Imagining the loss of such a large presence, “Riding With Red” seamlessly transitions into Red Bandana’s title track, an elegiac cowboy poetry benediction sure to leave a lump in anyone’s throat.

You’ll find equal parts sadness, joy, nostalgia, hope, familial love, and strength throughout the new album. That was the design of Watson, who wrote the bulk of the songs during reflective mornings on the ranch in Buffalo Gap, Texason his beat-up first guitar bought from a pawn shop.

Some of the sounds that set a tone or help tie Red Bandana’s tracks together were captured right there among the comforts of home and family. Consider the first thing you hear on the album —ambient chimes that lead into the mission-statement opener, “Ghost of Guy Clark.” Watson actually recorded the sounds of wind chimes handed down to him by both his grandmothers.

“I recorded their wind chimes in the closet at my house, and that’s how the record starts off,” Watson says.“Because there’s just an eeriness, a lonesome feeling when you hear those wind chimes.”

The eeriness is well-placed: “Ghost of Guy Clark” is a lyrical dream sequence in which Watson encounters and receives songwriting advice from a late legend. The song’s message is important enough that he follows it with a cathartic instrumental track, just to let the words sink in a little longer. And once the horn-tinged “El Comienzo Del Viaje” settles you, here come the driving beat and hard-lived lyrical message of “Dark Horse.”

It’s an ideal way to begin a new chapter following a period of greater awareness and chart success. The Underdog, Vaquero, and the hit country single “Outta Style” put a lot of new eyes and ears on Watson,from Texas and beyond. Yet the grassroots success didn’t translate to any traditional label deals, so he did what he does best: He worked harder and doubled down on his efforts.

“I wanted to show the industry that I’m like a one-man wrecking machine,” Watson says.“That I own my label, I own my publishing, I wrote all my songs. That country music is my only option. I have no Plan B; this is all I’ve got. So, for me, everything is on the line.”

Don’t mistake his urgency with a willingness to cut musical corners. Watson is flexing his songwriting muscles more than ever before, delivering thoughtful lyrical concepts through the filters and the styles that have captured his musical imagination over the years. “More than being known as an artist, I want to be known as a songwriter. I think that’s the greatest title. All my heroes are songwriters.”

Those heroes are saluted substantially in many tracks on Red Bandana: “Country Radio” touches on a romance and nostalgia for simpler, sway-worthy childhood musical memories. “Legends” evokes the full-throated glory of Waylon Jennings with its irresistible hook of a line, “Just like my heroes/I’m as free as the wind.” “Am I Amarillo” would fit right into an’80s George Strait record. And you get visions of Johnny Cash when you hear the train sounds (recorded by Watson at his ranch) and the darker lyrical themes on “Trying Like the Devil.”

Of that last one, Watson says it might surprise some of his fans to know that he often faces and wrestles with personal demons. He’s felt misunderstood at times whenever he’s been portrayed as an infallible family man, nothing more.

“I can’t handle the pressure of people thinking that I have it all together,” Watson says. “I want to be that guy that I’m like, ‘I’m screwed up, but I keep trying.’ And the first time I sang [‘Trying Like the Devil’]to my wife she was like, ‘Wow. Guess you’re just going to air the dirty laundry.’ And I said, ‘It’s what you got to do, girl.’”

Emotional truth defines any Aaron Watson record, but it’s especially urgent and raw in unexpected spots on Red Bandana. The record ends with a simple tribute to those who lost their lives in the 2017 Route 91 Harvest festival shooting in Las Vegas(“58”), but shades of the same grief and empathy for humanity help to fuel the up-tempo, Tom-Petty-style anthem, “Old Friend.” Petty passed away a day after the tragedy in Las Vegas.

In his grief following the two events, Watson came to a realization:“Music is so healing and music is that one thing we share in common. And that’s where I wrote ‘Old Friend.’I wanted it to have a Tom Petty vibe about it, but that song is about being kind to your neighbor and treating others the way that you want to be treated. You know, the golden rule.”

Watson fit so many ideas and sounds into one record seamlessly with the help of a new-to-him producer, rising NashvillestarJordan Lehning. An expert arranger who has assisted the likes of Rodney Crowell and Kacey Musgraves, Lehning was able to help Watson balance the stunning, emotional songswith less serious momentsthat could serve as a kind of country-radio gateway. After all the heartstrings pulled in “Blood Brothers” and “Home Sweet Home,” there are sexy toe-tappers likefirst single “Kiss That Girl Goodbye,”“Burn Em Down,” and “Shake a Heartache” to lighten the mood. For advice and approvalon the commercial appeal of a song, Watson turns to his precocious youngest child. “When my daughter likes a song and she forces me to put it on an album, what am I supposed to do? My hands are tied. I have no control over my wife or my daughter. I do as I’m told.”

Armed with 20 new songs, Watson feels more than ready to get out on the road and incorporate Red Bandana into his historically high-energy live concert dynamic. Even before the official tour begins, Watson says he’s already been having too much fun on stage.

“Our show right now is not even a fraction of what it’s going to be, but I swear, we start, we’re having fun, I look down at the clock and we’ve been playing for 75 minutes,” he says. “There’s been shows where I’m exhausted, but the second I hit that stage and I see people are excited for me, oh man. That’s the greatest high. Those fans are the reason I’m here and keep showing up night after night.”