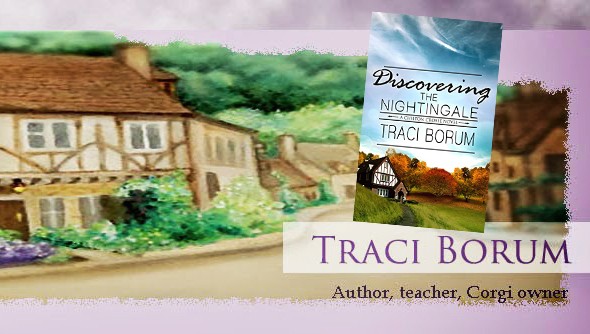 My first introduction to Traci Borum was over seven years ago! She had requested that I read and review her first book Painting the Moon – A Chilton Crosse Novel.

While some authors begin to get into a rut when they write more than one or two novels featuring the same locale and/or characters, Ms. Borum has not allowed either Chilton Crosse or the residents of the village to fall into that trap.

Traci has continued to keep her characters fresh and vibrant because of her amazing aptitude for character building.  Not only are the people of Chilton Crosse easy to embrace, but she does such a wonderful job of describing the village thtat you can almost smell the fresh clean air after the rain or the aroma of fresh-out-of-the-oven cakes and sweets from the bakery.

With Chelsea, Traci’s new main character; Luka, Chelsea’s first love from sixteen years prior; Mac, the local handyman; Matthew and Rachel, the vicar and his wife, and many others, it’s easy to find oneself so wrapped up in the daily life of the village and the heartache of the two star-crossed main characters.

As the village prepares for a local Renaissance Festival, complete with the presentation of Romeo and Juliet, a falconer, and vendors, there’s not much about living in a small village that Traci, a native Texan, has missed.

With her deep love for all things British, she manages to bring Chilton Crosse quite nicely to life in a book you will not be able to put down. This is definitely a book that will be hard to put down and is worth the read.

Just as delightful as the prior books… a sweet romance set in the quintessential English village. It’s a soothing escape from the turmoil of our current reality, beautifully constructed by a master of the genre.” – Gail Cleare, USA Today bestselling author.

Chelsea Barrett finally has her life under control. She recently moved back home to Chilton Crosse, finished her first year of teaching, and completed the renovations on her Nightingale Cottage. But the sudden appearance of Luka McKane stops her in her tracks. Luka is the vicar’s rebellious son and Chelsea’s first love from sixteen years ago—the one she never got out of her system, the one who still occasionally haunts her dreams.

When Luka decides to stay in the village indefinitely, Chelsea makes the best of it by choosing to ignore their rocky past and start fresh with him, as friends. But when Chelsea and Luka begin inching closer together, the lines of their friendship blur, and they’re forced to face their troubled past. Chelsea must decide whether loving Luka is worth the risk, a second time around.