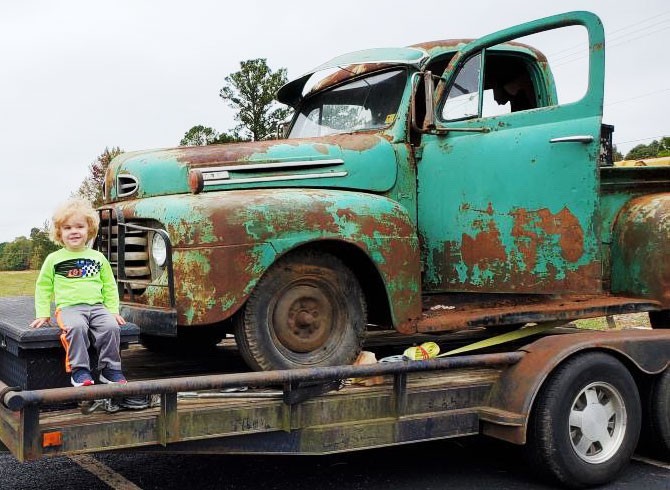 Garage Talk is a project between two friends. It never fails, every time Matt & Cory get together the conversation will always turn to cars; whether it be the latest news or trends, what is causing woe in the automotive world, or perhaps just to share a bit of joy. This passion for cars turned into Garage Talk: a discussion about all things automotive. We welcome you to join the conversation with us. Share your stories or join ours. Within this site you will find our weekly podcast, links to our social media pages, and a place or two to share your thoughts and opinions. So take some time and click around. Leave us a note, who knows….you may be mentioned in a podcast!

Wow! What a weekend we had! From Lamborghini’s to F100s there was something there for everyone and because of you, it went off without a hitch! (Or without any major ones anyway, sorry Cory).

It was chilly but for those who braved the cold it was worth it. Registration opened at 8:30 and cars were still rolling in at 11 that morning, none of which were a disappointment. There were Bel-Airs and F350s, there was a Civic and a GT-R clone, all of which came with a story.

And really those stories were the purpose behind the show. I had the chance to talk with several different owners there and listened to the history of the car, but even deeper than the history was the impact those cars had on their owners. So often we see our cars as simple transportation, a means to an end, but when we take the time to listen we realize our cars share in our adventures, in our sorrow, in our excitement, in our stupid decisions. Our cars, in a lot of ways, become a part of our family.

Just like our family, though, our cars don’t always have it all put together. They may not be the polished up Fiat Abarth, who’s the owner at the show was literally on his hands and knees polishing and shining his car before the show opened. Or the absolutely stunning Lamborghini Huracán Performante Spyder who let everyone know when he arrived with multiple symphonic downshifts before pulling into the driveway. Sometimes our family members look a little more like the 1966 Ford F100 unibody in multiple shades of what was left of red and white paint who’s engine was covered in oil from seeping gaskets throughout, or the 1984, and ’86, and ’91, and ’78 model square body Chevy that started life as a 1-ton crew cab wrecker and is now a step side 1/2 ton conglomerate of parts from six different years of trucks! Maybe sometimes it’s not about what we can buy, but what we can put together with what we have laying around, or assemble through our messed up, ugly, falling apart lives that get us where we need to be.

Sometimes that story is of a high school sweetheart who has stuck around through thick and thin, had three heart transplants and some bodywork (yes, I am talking about cars again) and was the star of our show last weekend and came in the form of a beautiful 1957 Chevrolet Bel Air owned by a man who purchased the car when he was 17 years old. Sure it’s been repainted and the engine has been swapped and the rear end replaced, but it’s still his car. It’s still the car that has seen years in the Army, trips across the country from one base to another, watched a family grow up in it, and now spends it’s time visiting car shows sharing it’s story with anyone willing to listen.

As I reflect on the many stories I was privileged to hear from this weekend I see more and more the correlation between our relationships and the cars we drive. With Thanksgiving and Christmas and other holidays just weeks away a lot of us will soon be spending time with our families. And if anyone knows the hidden scratches and dings from our past it’s the people we grew up with! It’s the people who made some of those stupid decisions with us! Maybe this car show wasn’t meant just to be an opportunity for people with otherwise “average” or “normal” or “not-so-fancy” cars to gather and celebrate those vehicles that get us to work in the mornings and back to our family at night, but a challenge, a perspective change, on our relationships with our families, coworkers, and even those we see at the grocery store. Maybe it’s a chance to let our guard down and let people in enough to see we don’t have it all together! We may polish up the outside and vacuum the carpet but there’s still a check engine light on staring us in the face, reminding us there’s something wrong. Maybe letting someone see our faults will let them know they’re not the only one with dents and dings, cause the truth is none of us have it all together and that’s OK! We all have our flaws, our issues, our secrets that keep us awake at night.

At some point, we’ve all been on Facebook scrolling through wishing our lives were as together as one of our friends. We’ve been the person scrambling to get the house cleaned before company comes over so they don’t see the mess our child made or the dishes that have been in the sink for a week(or longer). Maybe instead of trying to make everything perfect, we take the time to focus on the stories. For some of us, this holiday season may be the first time we’ve seen some of our family in years! For others, this may be the first Thanksgiving with someone missing.

I guess what I’m saying is instead of waiting to come to a car show until your car is perfect just go! Share the stories of the dents and dings. Laugh about the time you almost died because the suspension folded up under the car while driving down the highway! Celebrate the work in progress, enjoy the journey! Instead of stressing over the turkey and dressing not being done at noon and the pumpkin pie burning sit down to dinner and share the stories, the flaws, the head and heartaches from the year, and we all know it’s been a wild one! Make time to be vulnerable and open about what didn’t go your way because the truth is it hasn’t gone the way of anyone else in the room either.

I know you didn’t come here to read about family and relationships, you came to hear about a car show, and the show was incredible! But without you being there sharing your story, celebrating your car, it’s just another parking lot. Thank you for being a part of the first ANNUAL(I’m gonna make Cory say it) Unlikely Hero’s Car Show presented by Carology Detailing and made possible by you.