Blacktop Mojo: Burning Up The Roads To Success

About a year and a half ago I sat down to interview Blacktop Mojo, a Jacksonville based hard rock band riding a wave of momentum after several successful years together and an upcoming album release. The end of that interview finished with this:

“Blacktop Mojo can still be heard around East Texas on a regular basis, but I would definitely suggest checking out their website for more information and a sample of their music if you haven’t heard them. If it’s in your wheelhouse, get out and support a great local band that won’t be local for much longer at the rate their Mojo is working.”

As it turns out, I was a little more prescient that I anticipated as Blacktop Mojo’s stock has only risen in the ensuing months. With a successful album release, ever increasingly distant tour stops, and mounting accolades from industry critics and magazines, local BTM shows are becoming harder to come by.

In case you might not have heard of Blacktop Mojo, their sound can be described as “modern rock that got dragged through a puddle of southern rock and then dipped in a little bit of grunge”. The band was originally formed in 2012 and the current lineup includes Matt James on vocals, Nathan Gillis on drums, Chuck Wepfer on rhythm guitar, Ryan Keifer on lead guitar, and Matt Curtis on bass.

With a huge sound and chest shaking vocals, Blacktop Mojo brings a high energy rock show that leaves fans wanting more everywhere they go. While in the midst of rehearsals last month for their most recent tour that kicked off in San Antonio on April 20th, we caught up with them to see what had been going on for the past year and a half and what was on the radar for the rest of the year. 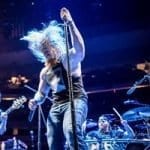 Johnny: So it’s been about a year and a half since our last interview with you guys and the last time we talked there was an album in the works. When did “Burn The Ships” release and how was the process different from the first time around when you recorded “I am”?

BTM: “Burn The Ships” released in March of 2017. The biggest difference between this record and our first record, “I Am”, was the amount of time we took for pre-production. On “I Am”, we spent about two weeks getting ready and arranging the songs before we went in to record it, where on “Burn The Ships”, we spent about eight months demoing and playing around with different ideas.

Johnny: How has the reception been to the album so far and do you guys have your own personal favorite song from it?

BTM: The reception to the album has been incredible this far. We’ve had countless positive reviews and feedback from publications all over the world. Also, our first single off of the album entitled “Where The Wind Blows” reached number 27 on the Billboard Active Rock chart last summer.

Johnny: You guys got to open for Bon Jovi last year in a sold-out stadium. Tell us about that about how you guys got that honor and a little about the experience?

BTM: We actually won that honor in a contest the band was putting on. We submitted some of our original music and were picked by Live Nation and the band’s management to open up the show. The experience was beyond amazing and the crowd was very receptive to us. We cannot thank the Bon Jovi camp enough for the opportunity and for treating us so incredibly.

Johnny: Obviously that put you in front of a lot of potential new fans but what would you say the biggest takeaway from that event was?

BTM: Our biggest takeaway from that night was that whether you’re playing in front of 20 or 20,000 people, you should treat it the same way. Make everyone feel like you’re playing in a stadium even if it’s an empty room.

Johnny: Blacktop Mojo has been trending steadily upward the past couple of years with several accolades from industry publications, over 40 thousand likes on Facebook, a new album, and you guys seem to play everywhere and anywhere. What kind of effect has the increased exposure and success had on the daily routine and what kind of new challenges have came along?

BTM: Our daily routine hasn’t changed much when we’re home. We still write and rehearse on a regular basis and go about business as usual. The increased exposure has made touring opportunities more readily available for us and has increased the number of people we can reach with our music, which is super exciting for us.

Johnny: You have a pretty extensive tour coming up that you’ll already be on the road for when this goes to print. Is this the biggest tour BTM has embarked on and what goes into planning a 2-month long road trip that covers, as best I could count, 32 states, both sides of the country, Canada, and 43 shows?

BTM: This is our most extensive tour to date. A lot of planning, routing, and generally putting the puzzle pieces together has gone on over the past few months by us and our team to make this happen. We couldn’t be more excited to get back out on the road and see our friends across the country.

Johnny: I’d say it would be time for a break after that sort of trip, but you guys are right back at it, playing Rock Fest 2018 up in Wisconsin with some huge names, do you guys ever have to step back, take a breath, and say to yourself “this is our reality”?

BTM: We are very blessed to be able to wake up and do what we love every single day. They say “you never work a day in your life if you do what you love”, so I don’t think we’ve ever really thought about taking a break.

Johnny: Were you able to see yourself at this point back when you played your first show at the Neches Fall Festival or the first “official” show as BTM at the Shelton Gin back in 2012?

BTM: It would have been hard to imagine getting to do what we do now back then. We’ve always just been happy to be able to play music for people.

Johnny: With what’s on your plate for the first half of this year, I almost hate to ask, but what’s on the radar for the second half of 2018 that you can share with us?

BTM: We have plans to keep touring throughout the rest of the year and are currently writing music for our third record.

Johnny: What has been the best memory from the ride so far?

BTM: It’s hard to pick just one from all of it. One of my favorites so far was riding back into town off of our first tour last Summer/Fall. We’d been out on the road for over 60 days straight with 7 of us basically living out of our van. We were tired, beat up, and hungry, but everyone was smiling and joking with each other. It really felt like we had accomplished something.

For more information on Blacktop Mojo and when they’ll be back at a location near you, check them out on the web: